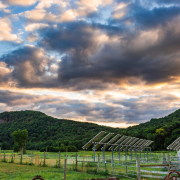 The South Deerfield dual-use array is a research facility built at the University of Massachusetts (UMass) Crop and Animal Research and Education Farm. The pilot project is the result of a team leveraging private, public, and governmental resources. Designed and constructed in 2010 by Hyperion Systems, a solar development company based in Amherst, Massachusetts, the UMass South Deerfield site is the oldest example of agrivoltaics in the United States. At the time, dual-use racking was not commercially available, so the Hyperion Systems team developed a custom solution. With guidance from UMass Amherst agronomist Dr. Stephen Herbert, the team began testing shading implications using 2x4s and plywood. The initial goal was to determine ideal shade conditions to grow hay grasses below the array while maintaining flexibility for future research opportunities.

The array is fixed-tilt and south-facing with module heights ranging from 6 to 8 feet to the leading edge. The panels are spaced at a range of 2 to 5 feet (E-W) edge to edge, which supports a wide range of crop productivity investigation under varying panel configurations.

For the first five years of the array’s existence (2010 to 2015), the field beneath the panels was used for cattle grazing. The beef cattle enjoyed the shade provided by the modules during the warm summer months and were able to scratch against the racking posts without damaging the array. The electrical components were housed in protective conduit to ensure animal and farm labor safety. Dr. Herbert found that the grass underneath the panels, the variable group, grew 80 to 90% of the yield compared to the grasses in full sunlight, the control group. What’s more, the team found that if the modules were raised above the cattle’s head height and the structure was built beyond the minimum local building code requirements, the racking could withstand interference from large grazing animals.

Since 2016, the array has been used for crop research. UMass South Deerfield has been a part of the NREL InSPIRE Project for three rounds (2016 to 2019, 2019 to 2022, and 2022 to 2025). Various crops have been studied during this time, primarily broccoli, bell peppers, kale, and Swiss chard. Other crops such as snap beans were grown for one season. In addition to crop trials, diverse layout configurations have also been explored. This includes growing the crops north to south and east to west directly beneath the modules, and in full sunlight between the panel rows. It’s clear from Dr. Herbert’s research that the crops under the panels benefit from the shade provided during drier growing seasons, like in 2016 and 2020, where the variable group did as well or better than the control group in full sunlight.

The UMass South Deerfield dual-use array is a landmark project in the history of agrivoltaics in the United States. It continues to provide valuable insight into the viability of crop co-location in New England and beyond.