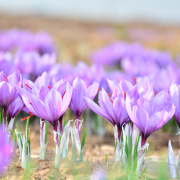 The North American Center for Saffron Research and Development is conducting a multi-year study of saffron crops grown under and adjacent to ground-mounted solar arrays. The study, which began in 2015, includes two years of field data from the Peak Electric solar field in Burlington, Vermont.

Researchers established the saffron corms in three locations within the solar field: in the aisles; directly under the solar panels; and around the perimeter of the arrays. These three locations include both raised beds and in-ground planting methods.

Saffron is a perennial crop suitable for sunny locations in arid and semi-arid regions. It is relatively resistant to cold. Yields typically increase for three years after planting, often increasing exponentially between the second and third years. Saffron is a high-value crop, with values ranging from $19-$55/gram retail. It is also a hand-harvested crop, making it well-suited for agrivoltaics.

In the first year of the field trial, the saffron yield was low, as expected for newly planted saffron corms, with a higher yield in the raised bed plots. The second year of the trial produced higher-than-average yields, with some plots producing yields three times higher –than averages.

Highest yields occurred in the lots located in the aisle and around the perimeter of the solar panels, with yields of 17 pounds of saffron/acre, which would be equal to $192,775/acre at an average price of $25/gram.

The plots directly under the solar panels did not show this increase in production. These plots showed a 30% decrease in yield, indicating that the area under the panels is not an ideal micro climate for saffron production. Figure 1 shows the average yield of the harvested saffron per acre during the field trial.

Research will continue at this facility and the AgriSolar Clearinghouse will plan a field trip for the public in the fall of 2022. The annual report for this study is available in the Information Library here.