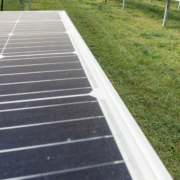 NPR recently visited Jack’s Solar Garden, a Colorado farm among about a dozen in the U.S. investing in the colocation of solar energy and farmland.

When Byron Kominek returned home after the Peace Corps and later working as a diplomat in Africa, his family’s 24-acre farm near Boulder, Colo., was struggling to turn a profit.

“Our farm has mainly been hay producing for fifty years,” Kominek said, on a recent chilly morning, the sun illuminating a dusting of snow on the foothills to his West. “This is a big change on one of our three pastures.”

That big change is certainly an eye opener: 3,200 solar panels mounted on posts eight feet high above what used to be an alfalfa field on this patch of rolling farmland at the doorstep of the Rocky Mountains. – NPR

As much of the western U.S. has been plagued by a 22-year megadrought, NPR reports that agrisolar is gaining momentum.

“Around the western US, water is the reason to go to war,” says Greg Barron-Gafford, a University of Arizona professor who is considered one of the country’s foremost experts in the field.

“Water is the reason we have to have real big arguments about where we’re going to get our food from in the future,” he says.

Barron-Gafford’s research in the Arizona desert showed some crops grown underneath solar panels needed 50% less water. He and other scientists have their eyes on the infrastructure bill and are pushing to get some of the estimated $300 million included in it for new solar projects to go toward agrivoltaics.

“If you really want to build infrastructure in a way that is not going to compete with food and could actually take advantage of our dwindling resources in terms of water in a really efficient way, this is something to look at,” Barron-Gafford says. – NPR

Greg Barron-Gafford is among more than 30 partners of NCAT’s AgriSolar Clearinghouse.

Listen to the story, here.