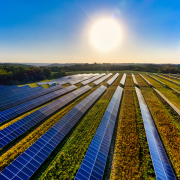 “French solar developer TSE, in association with Alliance BFC, has unveiled the initial results of a pilot study in France on how solar panels can affect soybean growth. The teams observed solid vegetative growth of the soybeans, with normal flowering, fertilization, and physiological maturation. The six varieties tested presented a diversity of yields: up to 25% difference in yield under the canopy and 19% on the control field.” – PV Magazine

Oregon Research Studies Use of Vertical PV for Crop Production

“There are many different ways to install agrivoltaic arrays. One common method is to raise the array to leave space for farming equipment or livestock to move freely below. Another trending design is to orient the PV arrays vertically, leaving wide open spaces in between the array rows.

The paper found that an area about the size of Maryland would be needed if agrivoltaics were to meet 20% of U.S. electricity generation. That’s about 13,000 square miles, or 1% of current U.S. farmland. At a global scale, it is estimated that 1% of all farmlands could produce the world’s energy needs if converted to solar PV.” – PV Magazine

“Associate professor Majdi Abou Najm from the Univ. of California, Davis, tested organic solar panels made from translucent material that absorb the blue light to generate electricity, but allow the red light with its longer wavelengths to pass through to the crops below.

At the UC Davis Agricultural Experiment Station, Abou Najm and his team planted three different plots of processing tomatoes, a common central valley California crop, under a canopy of selective red light, another of selective blue, and a third uncovered plot.

GNN has reported before on the recent phenomenon of ‘agrivoltaics,’ a practice of growing shade tolerant crops under solar panel arrays. The shade protects the crops from heat stress, while the plants’ transpiration humidifies the air beneath the panels, cooling them down and increasing their electricity output.” – Good News Network

Agrivoltaics In Illinois: A Regulatory and Policy Guide
Scroll to top