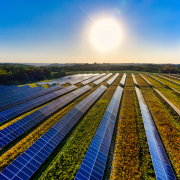 “America’s solar industry has boomed in recent years, and is slated for a big boost from the Democrats’ recently passed climate bill. Yet solar still only accounts for about 3 percent of electricity flowing into America’s grid—less than one-seventh the share from coal. If we want to phase out fossil fuels and accommodate an electric vehicle revolution, the sun’s contribution has to rise dramatically—and fast. But where to put all the panles?

The best places for solar installations, according to a 2019 study from the University of Utah and Oregon State, tend to be the areas where we already grow our food. That’s because, just like sun-loving tomato plants that fare poorly when the mercury creeps north of 85 °F, photovoltaic (PV) panels lose their efficiency at higher temperatures. But that doesn’t mean we have to starve ourselves to keep lights on and cars humming. By elevating solar panels far enough above the ground so people, plants, and animals can operate underneath, we can “essentially harvest the sun twice,” says University of Arizona researcher Greg Barron-Gafford. Enough sunlight to grow crops gets past the panels, which also act as a shield against extreme heat, drought, and storms.” – Mother Jones

5 Signs the US Agrisolar Revolution has Begun

“An upswell of opposition to large-scale solar power plants on farms took shape in the U.S. last spring, partly fueled by conspiracy theories about climate change. Nevertheless, farmland is attractive to solar developers. Now they have a new support system on their side, in the form of agrivoltaics.” – Triplepundit.com

“New Delhi: The Solar Energy Corporation of India (SECI) on Monday issued a tender for setting up agricultural solar pumps in selected states pan-India under component-B of the PM-KUSUM scheme of the renewable energy ministry.

‘Individual farmers will be supported to install standalone solar agriculture pumps of capacity up to 7.5 HP for replacement of existing diesel agriculture pumps and irrigation systems in off-grid areas, where grid supply is not available. Installation of new pumps will be permitted under this scheme except in dark zone areas,’ said the SECI tender document.” – Energyworld.com

“Scientists from the University of California, Davis, are investigating how to better harvest the sun — and its optimal light spectrum — to make agrivoltaic systems more efficient in arid agricultural regions like California.

Their study, published in Earth’s Future, a journal of the American Geophysical Union, found that the red part of the light spectrum is more efficient for growing plants, while the blue part of the spectrum is better used for solar production.” UCDavis.com

“A Massachusetts incentive program for projects that blend solar energy and agricultural production shows signs of finally gaining momentum after a slow rollout that has at times frustrated solar developers and farmers alike.

In 2018, Massachusetts became the first state to offer financial incentives for “dual-use” or “agrivoltaic” solar projects built above active agricultural land. Since the launch, however, just three projects have gotten up and running. Another eight have qualified for the incentive but not yet been built.” – Energynews.com