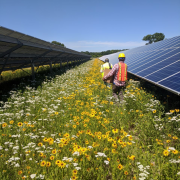 As we continue to deploy clean energy across the United States, more attention is being paid to how best to develop clean energy projects at the pace and scale that the climate crisis requires, while also ensuring that we are taking care of the sites and communities that host those projects. That’s where a national project from the National Renewable Energy Laboratory (NREL), Great Plains Institute (GPI), Fresh Energy, and the University of Minnesota comes in. Funded by the U.S. Department of Energy’s (DOE) Solar Energy Technology office, the Photovoltaic Stormwater Management Research and Testing (PV-SMaRT) project is using five existing ground-mounted photovoltaic (PV) solar sites across the United States to study stormwater infiltration and runoff at solar farms.

Together, the five sites represent a range of slopes, soil types, geographical locations, and PV configurations that will help solar developers and owners, utility companies, communities, and clean energy and climate advocates better understand how best to support solar projects and the host communities in which they are built, in particular lowering the costs of clean energy development while ensuring protection of the host community’s surface and ground waters.

On the banks of the Mississippi

With black-eyed Susan flowers dotting its expanse, the Minnesota site stands out among the five sites in the project. Situated on 18 acres of county-owned land near the Mississippi River in Ramsey, Minnesota, 30 miles northwest of the Minneapolis-St. Paul metro area, Connexus Energy’s Ramsey Renewable Station is flanked by an RV service center to its east, a highway to the north, and a specialty vegetable farm that grows pumpkins and peppers on the project’s west and south sides. Thanks to a partnership with the team at Bare Honey, a Minnesota-based honey producer, the site hosts beehives, too. The 3.4 megawatts of solar panels face south, in a two-in-portrait configuration on a fixed-mount racking system. Throughout the array, the panels are 24-36″ above the ground at the lowest edge.

Blanketed with sandy soil, the Connexus site was seeded with a pollinator-friendly vegetation mix throughout the array and open areas. And the pollinator-friendly aspect was the lynch pin in garnering community support. Pollinator experts and ecologists testified this wouldn’t be just any solar development—it would be a seasonally blooming, low-growing meadow, giving work opportunities to local seeders and apiaries as well as providing ecological benefits to the nearby crops surrounding watershed. Between the sandy soil and the ground cover, when it rains—or even pours—any excess water is channeled into the ground. And that has significant meaning for researchers, solar developers, utilities, and clean energy advocates alike.

Part of the process of planning out or conducting analyses on clean energy developments like solar farms is to test how well the site will hold up against an extreme weather event, like a flood. Engineers and researchers utilized three different design storms, essentially model storms of various magnitudes, to test Ramsey Renewable Station’s response and evaluate rainfall and soil moisture as well as determine how fast excess water would soak into the ground.

Through these models, the PV-SMaRT research team discovered that, against three design storms—two-year frequency storm, 10-year frequency storm, and 100-year frequency storm, the most intense of the three—all stormwater was channeled into the soil by the deep-rooted vegetation. Using both an InVEST modeling framework and a 2D Hydrus water model, University of Minnesota (UMN) researchers involved in the PV-SMaRT project, including Aaron Hanson and Jake Galzki, led by UMN professor Dr. David Mulla, have been able to keep tabs on the site, monitoring data from moisture sensors and comparing numbers from the site to those of other PV-SMaRT locations.

In fact, the team found that if they wanted to observe a runoff response, they had to actually reverse engineer the site to provoke one. For example, if the team conducted a model of the site in which vegetation suffered due to heavily compacted soil, then they could observe a runoff response. But, in virtually every other scenario, the combination of the diverse, deep-rooted pollinator-friendly vegetation and sandy soil ensures that all excess water soaks directly into the ground. In the research team’s eyes, that made the Connexus Energy Ramsey site a prototype for the rest of the PV-SMaRT project.

Benefits for the site and the study

And Brian believes that those involved in stormwater permitting at solar sites can learn something from the Ramsey example. “As a result of this study, stormwater permitting at sites such as this can be predictable and transparent to both the city or county and the developer,” he says, “reducing soft costs for solar developers while ensuring good water quality outcomes for regulators and habitat co-benefits for local communities.”

Vice President of Renewable Energy at GPI, Brian Ross notes that the site is important because it serves as a sort of bookend for the project: “It is a site that requires only ground cover green infrastructure in almost any circumstances. Comparing this site to our other project sites is incredibly useful. The characteristics at play at Connexus Energy’s Ramsey solar site point toward the potential capacity of a solar farm to mitigate not only the site but also contribute to broader watershed management.”

At Connexus Energy, Rob Davis, communications lead, points out that there was an overwhelmingly positive community response to the pollinator-friendly aspects of the project. “That’s why Connexus requires pollinator-friendly ground cover for all our solar sites, and it was especially important for this project due to the location near the Mississippi River and a specialty crop grower. The site’s soil and ground cover combine to easily handle heavy rainfall events,” he says.

Rob notes that when the project was built, it did not have the advantage of accurate hydrological models for PV solar projects, which resulted in a requirement for grading that included carving a two-foot bump diagonally through the project. Thanks to insights from the PV-SMaRT study, Rob is confident that policy changes can be made to avoid grading in the future, as it unnecessarily disturbs the soil and creates an uneven surface for vehicles managing a site. In its place, Rob points to the high-performance vegetation, as it requires less grading and fewer stormwater containment basins and is therefore a much better use of limited maintenance funds.

Insights yet to come

Data and observations from the Connexus Ramsey site serve as a benchmark as the PV-SMaRT research team continues to gather insight about the four other project sites across the country. Overall, the findings from the Ramsey site further validate the project’s recommended best practices in exemplifying how we can lower the soft costs of clean energy development and of ongoing maintenance while protecting the host community’s surface and ground waters, create needed habitat, sequester carbon in the soil, and help craft a truly sustainable clean energy future that will benefit everyone for generations to come. Read more about ongoing validation of this foundational research via Great Plains Institute.

A version of this article was originally published via Fresh Energy. Read it here.