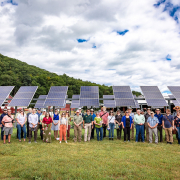 The farmlands of Massachusetts are cherished landscapes, steeped in cultural significance and family connections. Coming from the drought-ridden western United States, I was struck first by the lack of irrigation pivots and the lushness of the landscape, even after a heatwave uncommon to the area. I then scanned the rolling hills for solar, excited to see the Massachusetts SMART program in action. I wasn’t disappointed. The solar array at the University of Massachusetts South Deerfield Research Farm presented a picture-perfect site to start our tour.

The tour attendees matched my enthusiasm by showing up early and leaning over the fence to better view the solar farm. We were welcomed by Dr. Dwayne Berger from University of Massachusetts, who gave a presentation on the DOE SETO-funded research at the farm. This project involves the study of crop productivity on crops planted under a solar array installed by Hyperion Solar.

Next, Gerry Palano gave a presentation on Massachusetts Agricultural Solar Tariff Generation Units and their relation to agrivoltaics in the Massachusetts Solar Massachusetts Renewable Target (SMART) Program, which provides financial incentives for solar projects. From there, we went out to the farm, where Jake Marley from Hyperion Systems described the solar array design, and Dr. Stephen Herbert discussed the current crops and research at the array.After a quick lunch, we boarded the bus and started our mobile conference of speakers. Dr. Zach Goff-Eldredge kicked off the bus tour with a discussion of DOE SETO’s programs and their support of agrivoltaics.

AgriSolar Clearinghouse consultant Alexis Pascaris of AgriSolar Consulting then gave an inspiring talk, envisioning the future of agrisolar from the perspective of farmers, landowners, solar developers, and community members.

Candace Rossi from the New York State Energy Research and Development Authority (NYSERDA) then spoke to the group about the impactful programs in New York State and their relevance to AgriSolar around the country. We arrived at Nate Tassinari’s family farm in Monson with the sun high overhead. Nate welcomed the group to his home and talked about the Million Little Sunbeams project he developed  to preserve his family’s farmlands. The farm includes co-located solar and hay, an apiary, and an orchard. As shown in the photo, the 250-kW solar array, installed by Sunbug Solar, has an elevated racking system that accommodates haying equipment. The panels are bifacial, and Nate described the increased solar energy production from the bifacial panels as a result of both hay and snow reflections.

We then travelled to a late-breaking and welcome addition to our tour with Dan Finnegan from Solar Shepherd in Brookfield. On the way, Lexie Hain, former president of the American Solar Grazing Association and current Director of Agrivoltaics and Land Management at Lightsource BP, gave the group a background on solar grazing.When we arrived at Solar Shepherd, Dan’s assistant, Reggie the Wonder Dog, herded the sheep toward the gate to greet us and then herded them to the solar array, so we could witness solar grazing first- hand. Dan described his solar grazing work in Massachusetts and talked with tour members about the practicalities of solar grazing, such as sheep transportation, water needs, leasing, and solar grazing contracts.

After Solar Shepherd, we boarded the bus to travel to our last agrisolar site: Grafton Solar at Knowlton Farms. On the way, we heard from AgriSolar Clearinghouse stakeholder Ethan Winter from American Farmland Trust (AFT) about AFT work on smart solar siting, agrivoltaics, and at

Grafton Solar at Knowlton Farms provided the tour group with the opportunity to see a large-scale agrisolar site. The 334-acre hay farm includes solar developed in several phases on 75 acres. In addition to Paul Knowlton, fourth-generation family owner of Knowlton Farms, the project includes a slew of agrivoltaic advocates, solar developers, researchers, and the State of Massachusetts.

The agrisolar portion of Knowlton Farms, known as Grafton Solar, is owned and operated by AES Corporation, which pays Knowlton Farms lease payments and a stipend for the cost of farming. The Massachusetts SMART program provided incentives for the project and the University of Massachusetts and American Farmland Trust study the impact of the solar array on crop yields and soil conditions.

Paul Knowlton talked with the group about his decision to enter into a lease agreement for solar at his farm, its positive financial impact to his family business, and his hopes that the project will help keep the farm in the family well into the future. Dr. Sam Glaze-Corcoran from University of Massachusetts Amherst described soil and crop studies and, along with Gerry Palano and Swayne Berger, fielded questions about how those studies inform University of Massachusetts recommendations to the SMART program.  Ian Ward, of Solar Agricultural Services, discussed the site design, plantings, and the potential for this project to serve as an example for other farmers in New England. Ian’s advocacy centers on keeping farmlands in the hands of farmers and in preserving farmlands for the future. Julie Fine, AFT’s Climate and agriculture specialist then led the group crop co-location potion of the site and described her work assessing impacts to crops, soil, and ecosystem services.

The group then boarded the bus for the ride back to Amherst, full of ideas, connections, and energy. Charles Gould, from Michigan State University Extension, talked about his impressions of the day, his work in agrivoltaics, and his thoughts on the future. Judy Anderson, of Community Consultants, led the tour group in a roundtable discussion of the tour, ways to engage policy makers, and how to move forward in a way that supports agrisolar throughout the country.

Tours like this are months in the making. From scouting potential sites and tour routes to meetings with farms, solar developers, local governments, and potential speakers. They have the complexity and logistics of a mobile conference. This tour couldn’t have happened without the help of Alexis Pascaris of AgriSolar Consulting and Jake Marley of Hyperion Systems. They were at the heart of this tour and worked with me for months as we planned, connected, and revised. They were flexible with last-minute changes, and I deeply appreciate their contributions to the tour.

I’d like to thank University of Massachusetts for hosting the event at the South Deerfield farm and for allowing us to gather in their meeting space. Thank you, too, to Nate Tassinari for hosting us at his home in Monson; I appreciate his flexibility with last-minute schedule changes and his warm and insightful tour of his farm. Dan Finnegan and Reggie the Wonder Dog deserve a huge round of applause for treating the group to a demonstration of solar grazing in Brookfield. And thank you to Paul Knowlton, The AES Corporation, Ian Ward, Glaze-Corcoran, Julie Fine, Dwayne Berger, and Gerry Palano for the excellent tour of Knowlton Farms. It is a model agrisolar site with impressive research and support.

I’d like to thank the Solar Energy Technology Office of the U.S. Department of Energy for funding this work and Dr. Zach Goff-Eldredge for attending the tour. His support of agrivoltaics is evident around the country and the work the SETO team is doing in this space is creating a pathway for co-located agriculture and solar that works for farmers, community members, and solar developers.

I’d like to thank Danielle Miska, Andy Pressman, and Chris Lent from NCAT for their work on this project and for the AgriSolar Clearinghouse team at NCAT, around the country who cheered us on. I’d also like to thank Nicole Karr, our photographer. It is her beautiful photos throughout this blog. Finally, I’d like to express my gratitude to the tour attendees. The Follow the Sun Tour is one way the AgriSolar Clearinghouse works to build community, relationships, and trusted, practical information and I thank you all for joining us. It was a marathon tour of presentations, site tours, bus speakers, roundtables, networking, honey sticks, and fun. Your energy and enthusiasm are inspiring, and I can’t wait to see you on the road again.