AgriSolar Clearinghouse partner Rob Davis has generously offered a full Solar Farm Lego set as a prize for the winner of the competition for best photo taken at one of the Follow the Sun tour field trips.

This set is priceless and can not be purchased.  If you support the idea of a real-life Lego set being commercially available, vote here: LEGO IDEAS – Solar Farm.  For a great background on the kit, see this NREL blog.

Please post your Follow the Sun photos to our forum here, or tag us on social media by using the hashtag #AgriSolar. 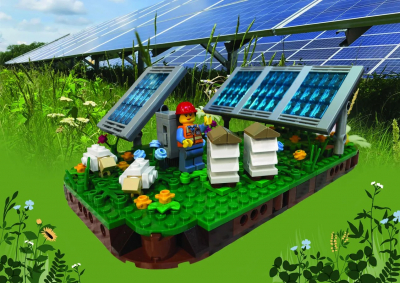 The Follow the Sun Tour launched in Arizona, at Biosphere 2 and the Manzo Elementary agrivoltaic research site, and it was a great educational, inspirational, and networking event.  Next up, we will travel to Minnesota on August 4 to tour Enel North America’s Lake Pulaski agrisolar site, US Solar’s Big Lake agrisolar site, and Connexus Energy’s agrisolar site in Ramsey. We’ll end the day on a sweet note with an Enel-sponsored Solar Farm to Table™ event featuring foods grown or pollinated at agrisolar sites.  Get your free tickets here: Events – AgriSolar Clearinghouse.

The next week, we’ll travel to Massachusetts for a tour of the University of Massachusetts South Deerfield agrisolar research site and then  the Million Little Sunbeams solar and hay farm, capping off the day at Knowlton Farms. Get your free tickets here: Events – AgriSolar Clearinghouse

Over the next year, we’re planning more field trips to central California, Texas, Oregon, Virginia, Idaho, New York, and many more sites.  If you have a site you’d like to highlight with an AgriSolar Clearinghouse fieldtrip, we’d love to hear from you.  We’re looking forward to seeing you on the road!

EDF Renewables (EDFR) has dedicated its efforts for over 35 years to create a sustainable energy economy.  They have developed nearly 24 GW and continue to manage nearly 13 GW of wind and solar energy generating projects in North America.  Among these renewable energy sites is the Arnprior solar project located in Ottawa, Ontario, Canada. Arnprior is a 23.4MW array that sits on nearly 180 acres and provides enough power to meet the peak energy demands of around 7000 homes. When completed in 2009 the array doubled the solar PV energy generating capacity of the entire country of Canada. Six years after construction was completed, one of the landowners, Diane Egan, expressed an interest to EDFR on how the site would be returned to agricultural land after decommissioning.

In 2015, the asset management team at EDFR started by curtailing the use of herbicides and pesticides, but they didn’t stop there on biodiverse and environmental projects at the site. By 2016, with all of the news coverage of decreasing bee populations, the team reached out to Marianne and Matt Gee of Gees Bees Honey Company to install hives at Arnprior. They started by installing two hives at the site that produced nearly 100 jars of honey per year. In 2022, there are now five hives that produce over 300 jars of honey annually.

In July of 2017, EDFR was awarded by the Government of Canada to provide a complete habitat for the monarch butterfly. The Arnprior site was the first of any solar project in Canada to be awarded by the Habitat Stewardship Program for Species at Risk (HSP SAR). EDFR formed a partnership with Victoria Wojcik and Kathleen Law of Pollinator Partnership, the worlds largest pollinator focused non-profit organization, to begin planting native wild flowers and milkweed. After a targeted seeding plan and professional training program, milkweed began to grow and thrive. Milkweed is the exclusive host plant that monarch larvae feed on. Within only one month of the award the larvae and iconic butterflies began to appear.

Furthermore in 2017, the Arnprior site launched a pilot program to use sheep grazing for vegetation management. Chris Moore and partner Lyndsey Smith of Shady Creek Lamb Company brought 50 ewes to manage the growth of the vegetation around the panels. EDFR found that not only did sheep grazing the vegetation under the solar panels align with vegetation management needs, but it also provided a mutually beneficial and effective solution for local sheep farmers interested in expanding their flock without having to buy or rent additional land.  Shady Creek Lamb Co. now had an opportunity to be paid for grazing.  Now in 2022, after lambing on-site, 500 sheep can be seen roaming around from spring to fall.  Shady Creek Lamb Co. has benefitted from dual-use by having access to additional land allowing them to expand their flock, grow their business and produce grass fed free range lamb and fiber for local markets.

Overall, the implementation of apiaries, monarch habitats and sheep grazing at the Arnprior site help to conserve farmland and promote healthy ecosystem biodiversity.  The site continues to maintain and expand the biodiversity projects exemplifying dual-use/agrivoltaics as a win-win solution for EDFR, the solar and agricultural communities and businesses being supplied by the honey, lamb, wool and electricity.

This thesis presents a case study of plant-pollinator interactions at a solar energy generation site in southwestern Oregon, a water-limited, dryland ecosystem. Results show no difference in visitation rates of insects to flowers located inside versus outside the solar array. These findings could prove useful when developing AgriSolar operations that include pollinators.

The article investigates the effects of solar arrays on plant composition, bloom timing and foraging behavior of pollinators from June to September (after peak bloom) in full shade plots and partial shade plots under solar panels as well as in full sun plots (controls) outside of the solar panels.

This study describes the manufacture and evaluation of a beehive box that is safe for inspection, optimum syrup fed, easily identifies the different states of the bee colony, and maximizes the colony health while preventing colony losses. An AgriSolar development may benefit in utilizing the findings from this study in relation to beehive boxes.

This study evaluates the monetary benefits of pollination services from installing honeybee hives in solar parks and discusses how the findings could inform policy and practice. The study includes an overview of field crops, fruit crops, pollination ecosystem service benefits as well as costs of honey beehives. These discussions could be used when developing AgriSolar operations that include various crops and pollinators.

A-National-Strategy-for-the-Co-location-of-Solar-and-Agriculture-Native-Pollinator-Habitat-Establishment-on-Solar-Farms-in-the-United-StatesDownload
February 8, 2022
https://www.agrisolarclearinghouse.org/wp-content/uploads/2022/01/AgriSolar-Library-.png 400 600 A. J. Puckett https://www.agrisolarclearinghouse.org/wp-content/uploads/2022/02/AgriSolar_stacked_1-338x400.png A. J. Puckett2022-02-08 10:15:432022-06-27 11:19:12A National Strategy for the Co-location of Solar and Agriculture: Native Pollinator Habitat Establishment on Solar Farms in the United States
Scroll to top