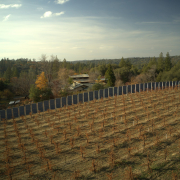 Sunstall, a California-based solar installer, is helping farmers harvest the sun twice with their new vertical solar system, known as Sunzaun. The Sunzaun vertical solar system was originally engineered by a company in Germany. After seeing successful installations of the product in Europe, Sunstall decided to bring the design to the United States. The market for agrivoltaic installations in America is growing, but one of the biggest barriers is tied to land use. Concern about installing solar on valuable agricultural land is common, and often increases as the solar system’s footprint increases. Traditional solar installations use a racking system to secure solar modules, which are then tilted to the appropriate angle on a horizontal axis. These tilted systems require a larger amount of land compared to vertical systems. Sunzaun is installed in a portrait orientation between two piles with no racking system involved. The minimalistic design uses holes in the module frames for a simple attachment to the piles without the need for a heavy racking system, while the bifacial modules themselves allow both sides of the panel to produce energy.

Sunzaun’s portrait orientation allows adjustments to be made more quickly during later stages of a project. In systems designed with a landscape orientation, the rails used to mount panels onto the racking system are cut to fit the expected panel size. Should the size of the panel change after all other components have been finalized, the project may be delayed significantly while the rails are reengineered to fit the updated panel size. Thanks to Sunzaun’s unique design, it is easy to adapt to a change in panel size by simply adjusting the distance between each pile. It is even possible to adjust the height of the panels from the ground if needed.

Completed in 2022, the first Sunzaun installation in the United States is located on a vineyard in Somerset, California. Although the vineyard owner already has rooftop solar on the property, an interest in new solar developments and agrivoltaics led to a new system within the rows of grapevines. Composed of 43 450-watt modules connected to a microinverter and two batteries, the Sunzaun system sits on a hillside between rows of grapevines. Only one row of vines needed to be removed to make room for the system, and harvesting equipment is still able to work in the field directly next to the Sunzaun. While it is too early to say for certain what additional benefits the Sunzaun may provide beyond on-site power generation, the benefit of preserving grapevines alone is a significant win for the winery.

As the United States continues to take steps to combat climate change, innovative solar system designs are more important than ever. The Sunzaun’s streamlined design reduces the time it takes to get agrivoltaic projects off the ground. When you factor in the ability to save valuable crops and viable land with a vertical system, the minimalistic approach that Sunzaun offers farmers becomes even more appealing. A successful growing season at the Somerset vineyard will hopefully reveal even more benefits to installing this promising product and encourage others to consider the value of a vertical solar installation as well.

All photos courtesy of Sunstall Inc.