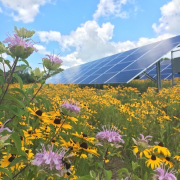 Seven years after designing our first solar array, more than 20 million deep-rooted and pollinator-friendly plants across more than 150 acres are helping us control costs while maximizing local benefits for our community, resulting in national recognition and hometown goodwill — but it almost didn’t happen. Now, our standard practice is to require pollinator-friendly ground cover across all of the large-scale solar arrays that feed into our grid.

Our first solar array—built in 2014 immediately adjacent to our headquarters—was initially designed with gravel, but a change set us on a different course. Working with one of our co-op members, Prairie Restorations of Princeton, Minnesota, a low-growing meadow seed mix was designed and implemented. Making productive use of the land under and around a ground-mounted solar array fits with one of the seven cooperative principles — Concern for Community. After a year or two of growing in, the site’s beneficial plants were crowding out weed species, reducing mowing costs, and making a positive impression with the community.

Having now partnered in the development of four additional grid-scale solar projects—two of which include 15 MW of battery storage—Connexus’ decision to proactively ask for productive use of the land under and around the panels is continuing to pay dividends: